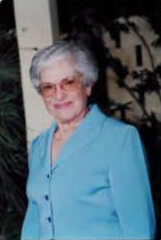 In 2012, the UA Horn Studio was endowed by former UA horn professor Daniel Katzen, in honor of his mother, Betty Katzen.

“When my mother passed away in 2009, we wanted to memorialize her love of music and family. The opportunity to name the UA Horn Studio became the obvious choice. Mom was the driving force behind her four children’s taking up instruments, and she always supported us in our performances and achievements.

My parents’ enthusiasm took us to concerts at an early age (including one with Igor Stravinsky conducting the Rochester Philharmonic Orchestra in a performance of The Firebird Suite!). Our early musical education at the Eastman School of Music was greatly enhanced by her love, and knowledge, of fine music. We were exposed to the sounds of all the great composers.

She also kept us going when disappointments arose. Her natural fine ear was very helpful in preparing us for concerts and recitals. Our mother listened to music on the radio throughout the day. When we returned from school, we often heard her playing Rachmaninoff on the piano. That piano – her instrument from childhood – sits in my living room today.

All of this exposure to music was a major factor in my career as a performer and teacher. As grandchildren arrived and grew, they would refer to orchestral music as “Grandma’s music.” Both of my parents were active in the original senior ensemble New Horizons band, which originated at Eastman and is now established throughout the US, Canada, and in foreign countries.”