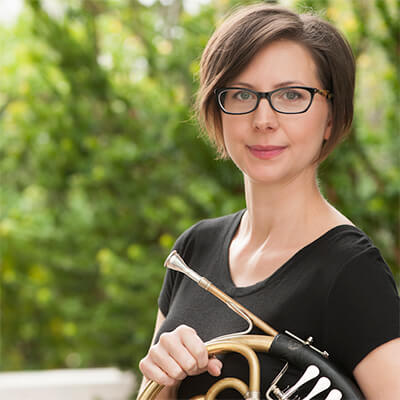 Passionate about sharing music with the world, Johanna Lundy is the newly appointed Assistant Professor of Horn at the Fred Fox School of Music. An active performer, she has held the position of Principal Horn with the Tucson Symphony since 2006. With almost two decades of orchestral, solo, and chamber experience, she has performed with ensembles across the United States, including the Albany Symphony, Florida Orchestra, New Hampshire Symphony, New Mexico Philharmonic, Phoenix Symphony, Des Moines Metro Opera Orchestra and True Concord.

As a soloist and recitalist, Prof. Lundy has appeared as a guest artist with numerous organizations, including the Aspen Music Festival, Grand Canyon Music Festival, Virginia Arts Festival, St. Andrew’s Bach Society, Arizona Friends of Chamber Music, Tucson Symphony, Sierra Vista Symphony, and the Downtown Chamber Series in Phoenix and others. She has received critical acclaim for her “robust sound” and her “breathtaking” and “extraordinary” performances.

Prof. Lundy’s teaching focuses on healthy, efficient playing techniques, mental preparation, audition success, and developing as an individual artist. Her former students have gone on to varied careers in music and positions with professional orchestras and other ensembles. She regularly presents master classes and appears at conferences and symposia.

In 2010, Prof. Lundy was named one of Tucson’s “40 under 40” by the Arizona Daily Star. In 2017, she received a grant from the Arizona Commission on the Arts to pursue a solo project focused on presenting contemporary music to new audiences. She recently released her first solo album, Canyon Songs, which features music inspired by art, nature, and devotion.

Two decades of working with a broad range of students and countless hours in the practice room have built the foundation of my teaching style. I have been fortunate to study with many wonderful musicians, who have also shaped my approach. Here is some information about the people who have had the greatest impact on me:

Richard Deane is the Acting Principal Horn of the New York Philharmonic. I studied with Richard when he played in the Atlanta Symphony. Richard has honed an amazing scientific-style approach to teaching the horn, which focuses on problem solving and developing technique. I use the skills he taught me every day, for my own playing and that of my students.

Roland Pandolfi teaches at the Oberlin Conservatory and is the former Principal Horn of the Saint Louis Symphony. His colorful personality and finesse in his horn playing are one of a kind. The best way to describe studying with Roland is to say he teaches you to play like a natural player. I am so grateful for the efficient, musical approach I gained from my time with him.

John Zirbel is the Principal Horn of the Orchestre Symphonique de Montréal. I studied with John over the course of four years at the Aspen Music Festival. John’s intensity and passion are communicated through every note he plays. As a musician, he is lauded by everyone who hears him play, “even his missed notes are musical.” He played a pivotal role in helping me transition from student to professional.

Gus Sebring is the Associate Principal Horn of the Boston Symphony. Gus’ positivity, musicality, and open approach to learning are beloved by many in the Boston musical community. Gus is an active model of what day-to-day excellence looks like and how to pursue the highest level of professionalism.

Jamie Sommerville is the Principal Horn of the Boston Symphony. His deep, thoughtful approach to music extends much further than just playing the horn well. Jamie helped me learn how to go beyond the traditional approach to pieces and to truly dream in the language of musical expression. His memorable, sensitive, and sparkling performances remain an inspiration.